For thousands of years prior to the Industrial Revolution, lime was the principal binder used in construction. Mixed with mortars, it held beams in place and was an important component in laying brick walls. Lime was used alone as a binder in paints and whitewashes. It was later combined with other minerals in venetian plasters for application of expensive high-grade stuccos in palaces and churches.

Because of its durability and long life, lime was used to help strengthen many medieval structures. Ancient and Renaissance artists preferred using lime in frescoes because it blended perfectly with pigments that could produce brilliant colors and resist fading.
The use of lime began to decline with the invention of Portland cement in 1824, and continued through the 1960’s, at which time the interest in historical preservation began to increase. Architects and builders “rediscovered” lime’s interesting characteristics not just for remodeling and renovation, but also for new construction.

4,000 B.C., the Sumerians are credited with discovering how to make limestone putty from limestone rocks, by “cooking” the stones at high temperatures, then adding back water. 2,000 years later, the Romans perfected their technique by placing the “cooked” porous rocks into earthen vessels, and burying them at underground streams, and allowing the water to slowly seep through, and after about 1 year, a  lime putty was created. 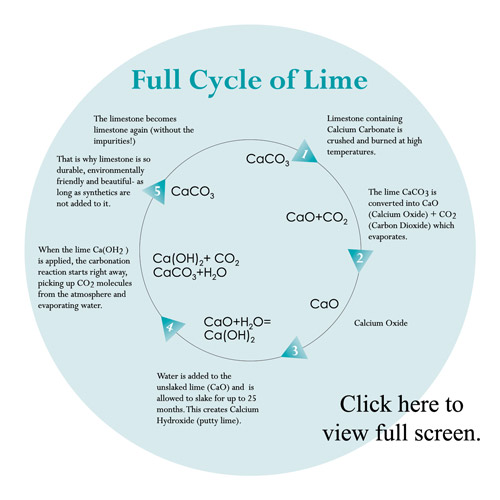 Read About the Cycle of Lime